The Meaning of a Mural

Sometimes the work and even the successes of community social revitalization go unnoticed. Improvements in quality of life are not always immediately apparent to the naked eye. 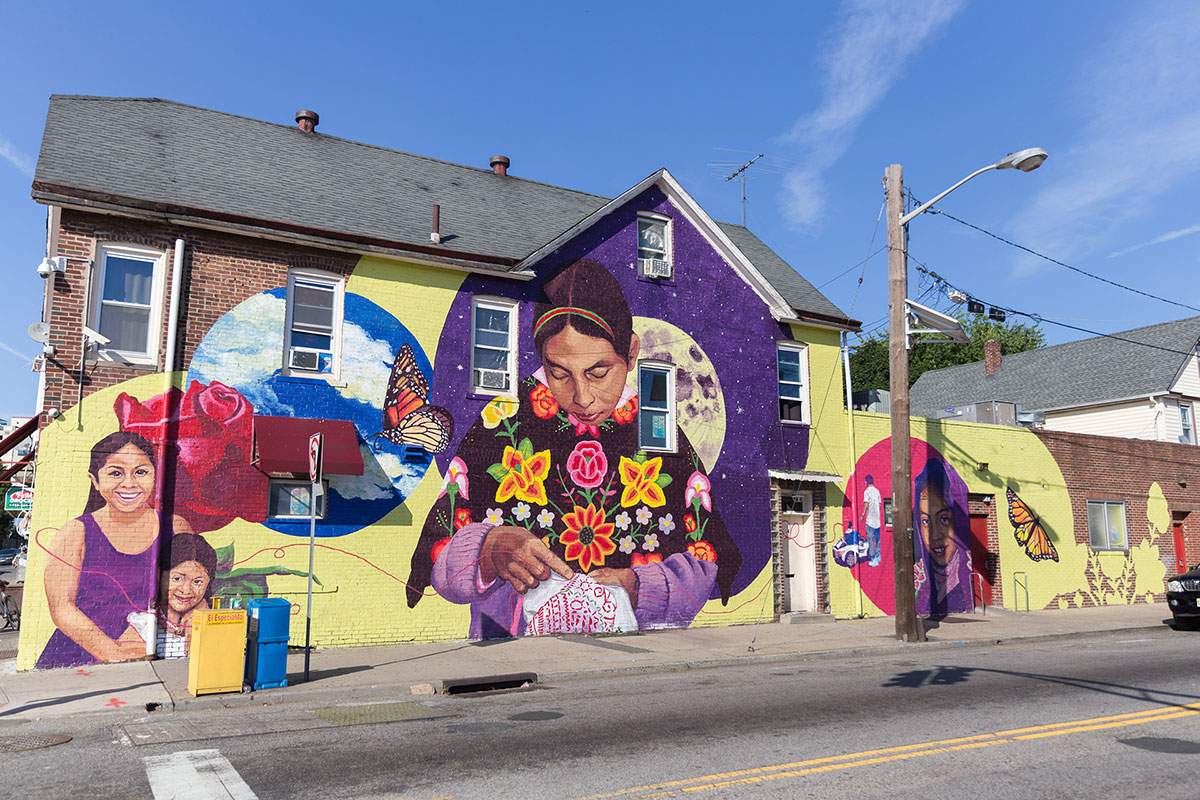 So there is something especially gratifying for me and the residents involved in the Esperanza Project in our most recent accomplishment: a wonderful new mural at the prominent Jersey Ave-Handy St intersection in the heart of the French Street corridor. Other successes might fly under the radar, but there is no ignoring this mural! It is big, it is bright and colorful, and it is an unabashed celebration of the vibrancy and resilience of Latino immigrant families (particularly through the lens of Oaxacan Mexican culture).

“families undertake the flight of freedom and love, facing an infinite number of obstacles, to reach a destination…”

That, in our estimation, is a very good thing. Despite its vitality, the French Street corridor is not noted for its physical attractiveness. Even as the area’s restaurants and retail stories flourish, litter and vagrancy are constant complaints, and the small park and monument that sit at the central intersection are in disrepair.

So when a group of Esperanza resident-leaders and I toured the neighborhood last July with Layqa Nuna Yawar (pronounced Lunar New Year), a Newark-based artist and graduate of Rutgers Mason-Gross School of the Arts, I was thrilled when his eyes landed on a prominent building at that central intersection and he said, “That is a great place for a mural.” (In an ironic twist, the building also houses a neighborhood bar with which we had previously battled because of nuisances and fights.)

Fast forward a year, to a recent Friday evening, and we were celebrating the dedication of the new mural with an event in that small park alongside the artist, our partners from coLAB Arts, local residents and business owners, the Mayor and other dignitaries. It was a fitting culmination of a process propelled by the community’s desire to reclaim beauty in neglected places. It is our second mural now in the neighborhood, but we hope many more are to come.

We hope you’ll visit the mural and find yourself inspired and renewed by it, as we have. In reflecting on the mural and its meaning, you might consider this lovely phrase from the remarks that Ricarda, an Esperanza Project community leader, shared at the mural dedication: “families undertake the flight of freedom and love, facing an infinite number of obstacles, to reach a destination…” This mural itself is not the destination, but it is certainly an unforgettable sign-post on the journey, and one that will not go unnoticed.